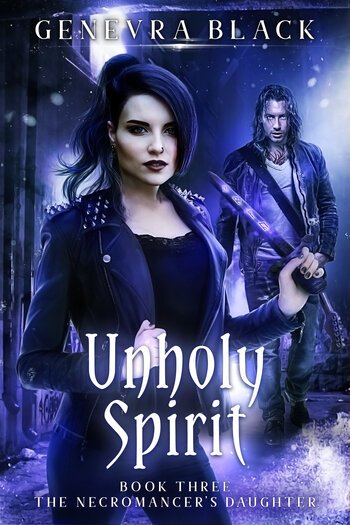 Heroes never die … but they just might give up the ghost.

Two weeks ago, a tragedy brought Edie Holloway to her breaking point, and her life was flipped upside down once again. Without a guiding hand, the Reach’s flimsy connection to its grand past is destroyed. What’s left of their faction is now forced to pick up the pieces and start over—with Edie at the helm.

She hardly has time to panic about that, though. The leaders of the Gloaming have fled to New York City, hoping to recruit another hellerune hiding there—a powerful ally, if they can manage it. Edie intends to reach him first.

But when the “powerful ally” turns out to be a washed up punk singer, it’s the helpless leading the clueless. With the powers he’s not sure how to wield, he’s trapped his dead daughter’s soul inside his electric guitar. His only hope of returning her to her body lies with the Reach … but, turns out, that’s even more difficult than it sounds.

Between a July blizzard hitting the city and a rising neo-Nazi movement led by a familiar face, there’s plenty keeping them from their task. But they don’t have much time, and not just because of the ghost haunting them. Satara doesn’t know how to fulfill her shieldmaiden oath … and square one is a lousy place to be when an eternity of torment is on the line.