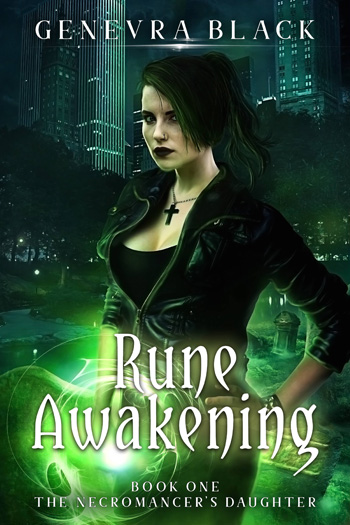 Edie inherited two things from her dead father: a gun-toting zombie and the power to raise the dead. She’s not sure which is worse.

Edie Holloway’s life was already getting a little weird. Attacked in the park by two ghouls? Check. Saved by a glowing, one-handed guy? Sure, why not. Hamster kicked the bucket for no reason? Possibly… except he’s breathing again.

But nothing prepared her for a zombie showing up in her living room.

As an undead servant of her family bloodline, he has some news for her: she’s a necromancer—and she needs to figure out her powers quickly, before she ends up like her father. Good news is, he knows someone who may be able to help—for a price.

Turns out the creatures of Norse mythology are real, and they’re headed for war. Edie’s only hope lies with the remnants of an ancient faction: a headstrong valkyrie, a reluctant shieldmaiden, and a seven-foot fish man who refuses to wear pants.

Two things stand in their way: A massive army commanded by a ruthless dread lord; and the glowing, one-handed guy who saved her life—and who just might want her dead.

Books in this Series